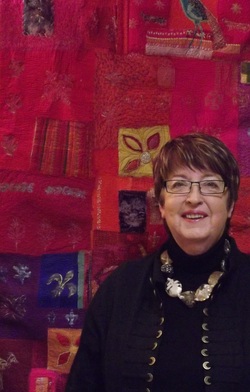 I am a mixed media artist whose primary medium is textiles.

I discovered textiles by one of those wonderful, unexpected chances that can change lives. As a PhD student, in a new city, knowing no-one, I wanted an undemanding hobby to offset long hours working alone in the library. I saw an embroidery class advertised and thought this would fit the bill. Although  I had not really done any embroidery, I had  always been drawn into shops selling embroidery threads. I think I was seduced by the wonderful colours; the carousels of skein upon skein of glorious yarns turned me into a kid in a sweet  shop, and I often bought some, though the threads were never used. But now seemed the time to learn; surely there couldn’t be a more undemanding hobby than embroidery? So I signed up – one day a week for an academic year. It didn’t occur to me that this was possibly a bit more serious than the 2 hours a week evening class I had thought I’d be doing.

They say ignorance is bliss! Well, it was, to the extent that if I hadn’t been so ignorant, I would never have signed up for this class. It turned out to be part 1 of a City and Guilds embroidery course. To do both parts would eventually take 4 years. And was I ignorant! I was plunged into a bewildering world of  art and design, paper making, felt making, fabric dyeing, printing and painting … not to mention ‘proper’ embroidery, like blackwork and whitework, pulled thread work, canvas work…! I couldn’t do any of it!

After a few weeks I thought I would creep weeping and wailing back to the safety of the university library. I was at home there, I knew my way around, and what to do, how to handle it. But a nagging little voice kept telling me that I did not want to give in. I had paid real money for this course; the people were nice; and I was a bit peeved at the reaction that I got when I said I was doing an embroidery course – polite disdain is the best way to describe it. And I didn’t want to give these folk the satisfaction of seeing me quit.

So I stayed. Only for the first year, of course. After that, I could leave with honour I thought! I would have tried it, not wasted my money, enjoyed pleasant company …

But something odd  happened in the third term of that first year. I became totally hooked. And after that there was no way I could give up. This undemanding hobby became a passion; I completed both parts of he C&G embroidery course and then  wrote up my PhD thesis whilst in the first year of an HND in multi-media textiles. At the end of  my first year of the HND I obtained my PhD; at the end of my HND I went to New Designers in London.

I spent a couple of years toying with academic work and doing freelance design for the fashion trade. But I became frustrated with  both so I decided to stop both  and simply get on and make my own art. I did an MA in Contemporary Applied Arts and my textile practice is now an essential part of my life.

I use mixed media techniques and machine embroidery to create work which reflects my interest in landscape and the birds which inhabit it and also the more stylised world of medieval art and craft. I use natural fabrics as backgrounds that are then painted and dyed before being embellished with applique and  machine and hand stitching.

I live in the Yorkshire Dales,  on the southern edge of Wensleydale, a very beautiful part of England that offers me unlimited inspiration; an area of wonderful landscapes and  bird life and full of medieval art and architecture.